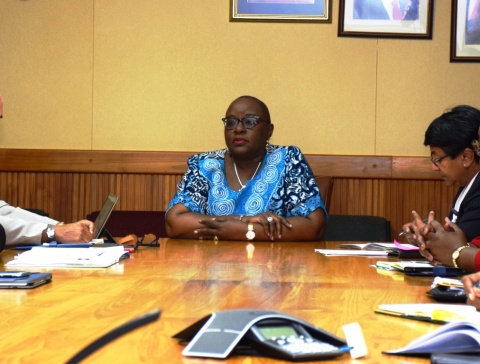 Government has continued to respect the tremendous importance of the economic potential resident in the Micro Small and Medium Enterprise (MSME) Sector, and recognizes it as an important driver in this country’s economic transformation. It is for this reason, says Planning and development Minister, Camille Robinson-Regis, that Government has adopted a whole of government approach to providing incentives and latitude for its growth.

Minister Robison-Regis was responding to an Express Editorial which called on Government “to take the SME sector seriously and begin to reconstruct the financial and policy environment to give it the springboard needed for survival and growth.” Expressing broad agreement with the editorial content, Mrs. Robinson-Regis noted that the Government’s economic recovery plan with respect to this sector is indeed being guided by the policies contained in the Roadmap to Recovery, but is located within the wider context of the Government’s Vision 2030 Strategy.

According to Minister Robinson-Regis, whose Planning Ministry also has oversight of the implementation of the Public Sector Investment Programme (PSIP), Government’s intentions have been made clear through a combination of fiscal investment through infrastructural development, grants, interest rates readjustment, financial support for companies and individuals in the MSME Sector, as well as other projects encompassing opportunity creation for citizens to develop business ideas. This, she said, is manifested through the initiatives undertaken in several Ministries including, but not limited to the Ministries of Trade and Industry, Finance, Social Development and Family Services, Agriculture, Works and Transport, and the newly created Ministry of Youth, Development and National Service.

The creation of the Ministry of Youth, Development and National Service, said Minister Robinson-Regis, was borne out of the recognition that there was need to create a more supportive environment that would anticipate and respond to the needs of the MSME sector, thus facilitating their greater contribution to national development. She said, “This Ministry is now actively working to unlock the entrepreneurial potential of our youth in particular, by encouraging and promoting youth entrepreneurs.”

Pointing to Government’s adherence to the recommendations contained in the Roadmap to Recovery Committee’s report, Minister Robinson-Regis indicated that Government has focused on three immediate priorities, namely, addressing and mitigating the hardships inflicted by COVID-19 pandemic, restarting the economy, and laying the foundation for sustained economic recovery.

Minister Robinson-Regis further outlined a number of actions taken by Government in furtherance of these three priorities. These included:

According to Minister Robinson-Regis, the MSME sector in Tobago has also been specifically targeted and has benefitted from the following:

She noted as well that the Ministry of Trade and Industry has a Grant Funding Facility to assist SMEs in 8 designated sectors. Through this facility, eligible businesses can access funding up to a maximum of $250,000 to ﬁnance 50% of the cost of acquisition of new capital related to manufacturing, agro-processing, financial services, maritime services, creative industries, software design and applications, fish and fish processing and aviation services.

Government’s Sowing Empowerment Entrepreneurial Development (SEED) Grants, administered through the Ministry of Social Development and Family Services. This $15,000 Grant is offered to micro business entrepreneurs in different fields, all of whom have expressed great satisfaction with this initiative.Additionally, she said, approximately 50 micro business owners have already benefitted from

Minister Robinson-Regis concluded by noting that all these initiatives supplement those already being carried out by the National Entrepreneurship Development Company (NEDCO) and the Agricultural Development Bank (ADB). These initiatives are all designed to ensure that there is another layer of economic activity that would, in time, buttress the national economy against the proclivities of an uncertain oil and gas sector.

Since the onset of this pandemic, said Minister Robinson-Regis, Government has injected close to $6 billion into various measures that have assisted in bolstering the micro small and medium enterprise economy. This is evidence enough, she said, of Government’s commitment to its vision of widening the scope of economic activity that could be sustained not only during the current period, but moreso in the post-pandemic period.