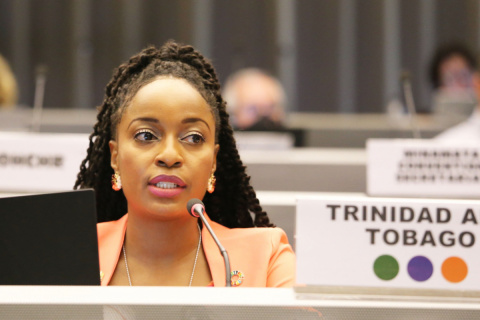 T&T has made history for the Caribbean once again. Ms. Keima Gardiner, Waste Management Specialist at the Ministry of Planning and Development has been elected as the President of the Bureau of the Conference of the Parties (COP) to the United Nations’ (UN’s) Stockholm Convention on Persistent Organic Pollutants (POPs). Ms. Gardiner is the first representative from the Caribbean region to ever serve in such a post since the Convention’s entry into force nearly two decades ago in 2004. Ms. Gardiner has been Trinidad and Tobago’s lead negotiator on chemicals and waste since 2014, serving as the Head of Delegation for Trinidad and Tobago at the the last five Meetings of the COPs to the Basel, Rotterdam and Stockholm Conventions. This includes at the recently held 2022 Meetings where the national contingent also consisted of Ms. Jiselle Joseph of the Environmental Management Authority (EMA) and Mr. Hasmath Ali of the Ministry of Health, who was also elected as a member of the Chemicals Review Committee (CRC) of the Rotterdam Convention.

The Group of Latin American and the Caribbean (GRULAC) vested the confidence in Ms. Gardiner to serve as President by nominating her as the representative for the region, and she was subsequently elected by the 157 Parties of the Stockholm Convention in attendance at the last Meetings of the COPs. Ms. Gardiner will serve as President, and by extension Head of the Bureau of the COPs for the Stockholm Convention, until the closure of the Eleventh Meeting of the Conference of the Parties to the Stockholm Convention (COP 11) in May 2023. The Bureau reviews progress made in implementation of the decisions adopted by the COP at its preceding meeting, as well as the work undertaken during the intervening period by the main subsidiary body of the Convention, the Persistent Organic Pollutants Review Committee (POPRC). She will also preside over the next Meetings of the COPs for the Basel, Rotterdam and Stockholm Conventions, carded to take place in The Bahamas in 2023.

Chemicals addressed under these conventions are often carcinogenic, toxic or otherwise very dangerous to human health and the environment. In her tenure as President, Ms. Gardiner will play a critical role in advancing global negotiations and galvanizing international action to hasten the eradication of these toxic chemicals to make the world a safer and healthier place for all. Critical matters to be addressed under COP 11 for the Stockholm Convention include the looming 2025 deadline for elimination of one of the ‘dirty dozen’ chemicals listed under the Convention-polychlorinated biphenyls (PCBs), five new POPs to be proposed for listing and the need for adoption of  the long outstanding non-compliance mechanism.

Ms. Gardiner possesses a combined sixteen years of academic training and professional experience in environmental management and policy development, and for the past nine years has managed the domestic implementation of the provisions under the three chemicals and waste conventions to which the country is signatory. She has also been key in the provision of technical support towards development and implementation of policies, legislation and initiatives on chemicals and waste in Trinidad and Tobago.

Her extensive leadership experience in the BRS chemicals and waste cluster spans from the international to local scale, and includes appointment as one of two Vice Presidents for the GRULAC region on the Bureau of the Stockholm Convention from 2013-2015, and as Co-chair of the Strategic Issues Contact Group under the Basel Convention on the Control of Transboundary Movements of Hazardous Wastes and their Disposal at the 2021-2022 BRS COPs; which culminated in the successful adoption of the negotiated text. In advance of this, Ms. Gardiner was also effective in co-chairing the negotiating contact group on the same matter at the face to face Resumed Session of the 12th Meeting of the Open-ended Working Group of the Basel Convention. These responsibilities were enhanced through her active engagement as national focal point on regional and international committees such as on the Steering Committee of the Intergovernmental Network of Chemicals and Waste for Latin America and the Caribbean, and as Chair of multiple committees specific to chemicals and waste issues nationally.

POPs are a group of man-made chemical substances that remain chemically intact for extensive periods, are highly mobile, concentrate in the fatty tissue and pose a risk of causing adverse effects to human health and the environment. The Stockholm Convention on POPs was adopted in May 2001 and entered into force on May 17 2004, and calls for international action on three categories of POPs: pesticides, industrial chemicals, and unintentionally produced POPs. The Convention, which initially addressed 12 substances (referred to “the dirty dozen”), now has 31 POPs listed, as of June 2022. There are currently 185 Parties to the Convention, including Trinidad and Tobago which became a Party in 2002.