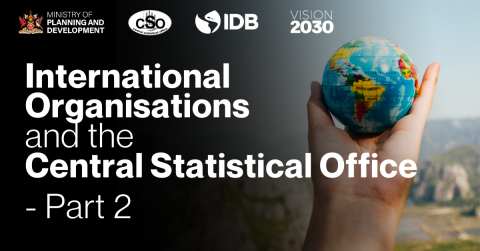 As part of the continued operations of the CSO, there have been partnerships with several international bodies toward this aim and its primary function; to facilitate informed decision-making through the provision of quality data. Some such partnerships involve the Inter-American Development Bank (IDB), the Partnership in Statistics for Development in the 21st Century (PARIS21) agreement and United Nations (UN) organizations.

The Inter-American Development Bank (IDB) has provided consultative services to the CSO for the modernization of international, regional and national statistical systems. The IDB also assisted in the redesign of the Household Budgetary Survey (HBS) and provided training for the Continuous Sample Survey of the Population (CSSP), ultimately empowering the CSO to conduct more efficient data collection and dissemination.

Three years later, PRASC, CCS, and the IDB worked together to organize the Census Management and Planning Workshop in Guyana to prepare for the now-postponed 2020 national census. The workshop’s aim was to encourage regional collaboration and improve two technical elements of the census: the Geographic Information System (GIS) and the Computer-Assisted Personal Interviewing (CAPI) software. These two elements have been inducted into the CSO’s data collection process and are expected to be utilized for the national census in 2022.

The CSO has participated in PARIS21 initiatives to improve the national statistical system. It was one of six countries surveyed for a PARIS21 report entitled “Informing a Data Revolution” which has been used to analyse developmental progress.

The result of that report led to the formation of the Draft National Strategy for the Development of Statistics (NSDS) and the implementation of an integrated National Statistical System (NSS) involving all relevant stakeholders.

In a Trinidad Guardian Interview, Joanne Deoraj, Permanent Secretary of the Ministry of Planning and Development highlighted the importance of an NSS, "Good statistics are necessary to ensure public and private efficient working, for the society and the environment. When we talk about good statistics we are talking about timely, accurate and detailed statistics that can enable the effective management of T&T's macro-economic policy, monitoring and fiscal policy."

The CSO and PARIS21 also conducted a gap analysis of the country’s Poverty Reduction Strategy prior to the finalization of the UN’s Sustainable Development Goals (SDGs), further clarifying T&T’s understanding of the need for official statistics to achieve its own developmental goals.

Several United Nations organisations have worked with the CSO to improve the efficacy of our statistical system. REDATAM, the CSO’s national census data processing and analysing software has been provided by the UNFPA’s regional body, the Economic Commission for Latin America and the Caribbean (ECLAC).

Socio-economic data from the CSO is used to inform reports made by the Joint United Nations Programme on HIV/AIDS (UNAIDS). In the past, the United Nations Population Fund (UNFPA) provided support for the CSO in the projection of the population.

UN Women has collaborated with the CSO to collect data on gender equality indicators in order to monitor the country’s alignment with the SDGs and international treaties. So has the United Nations International Children’s Emergency Fund (UNICEF) via the facilitation of the Multiple Cluster Indicator Survey for internationally comparable data on the conditions affecting children, adolescents and women in T&T.

The CSO has received extensive technical assistance from the International Monetary Fund (IMF) to revise and update its methodologies for the Indices of Retail Prices, Domestic Production and Producers’ Prices as well as the Gross Domestic Product, both the annual and quarterly series.

PRASC has also assisted with the compilation of the Index of Import and Export Prices and Supply and Use Tables. They have also provided training on these areas as well as Communications with the Media.

Together, these international organisations and the CSO aim to develop the country’s national statistical system and provide official statistics which improve T&T’s global standing and promote our social and economic development.