Can T&T earn $$ from Carbon Credits? This IMA Research Project is the First Step 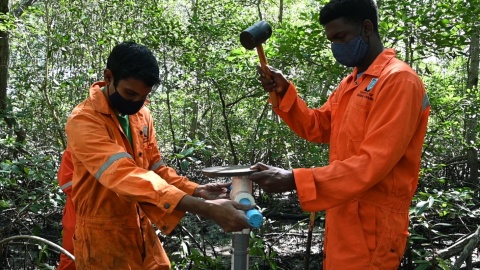 Trinidad and Tobago stands to benefit financially from research being led by the Institute of Marine Affairs (IMA) into the carbon content of mangrove soils. The 5th National Report of Trinidad and Tobago to the Convention on Biological Diversity (CBD), which was presented to the Ministry of Planning and Development, assessed the natural capital of the country’s upland and coastal ecosystems. The delivery of good quality water (water purification services) was valued at approximately US$88 million annually; while Northern Range forest soil retention services at US$622 million annually; and shoreline protection provided by coastal ecosystems for Trinidad and Tobago in the range of US$3 and US$133 per hectare per year. While the benefits of this natural capital accrue to residents of Trinidad and Tobago, the country does not directly earn money from these ecosystem services. The Mangrove Soil Carbon Sequestration Assessment, a blue carbon project, funded by the British High Commission, will provide essential data, putting a concrete monetary value on the carbon currently stored in our mangrove forests, from which Trinidad and Tobago can earn foreign exchange in the future.

Planning and Development Minister Camille Robinson-Regis stated, “This project is highly profitable to Trinidad and Tobago, not only for its environmental benefits, but also for the monetary value which it can accrue for the nation.”

Mangrove forests are one of the most carbon dense ecosystems on earth, with over 90% of their carbon being stored in the mangrove soils. The Blue Carbon project, which will soon be completed, was initiated in January 2021 and involves the analysis of soil cores from various mangrove sites around the country, including sites at the Caroni Swamp and Nariva Swamp. Research sites were carefully selected to cover the wide gamut of environmental variables faced by mangroves. The IMA will therefore gain an understanding not only of which of Trinidad and Tobago’s mangrove forests store the most carbon, but also of the factors that contribute to variances in the amount of carbon stored in mangrove soils.

This soil carbon project builds upon a previous study conducted in 2020 by Professor John Agard of the University of the West Indies in collaboration with the IMA. That study measured the carbon content of mangrove trees specifically. Together with that research, the IMA is set to develop the most accurate estimation of Mangrove Forest Carbon Storage ever done for Trinidad and Tobago. This project is also being conducted in collaboration with researchers, academics and government bodies from Guyana and Suriname and will give the first ever measurements of mangrove soil carbon for the countries involved.

Carbon dioxide, the most commonly produced greenhouse gas, is one of the main drivers of climate change. Carbon sequestration is the process of capturing, securing and storing atmospheric carbon dioxide and is now viewed by the scientific community as a critical component of combatting climate change. While carbon markets, which assign a value to and allow for the trading of units of greenhouse-gas emissions, are still somewhat in a developmental phase, a necessary prerequisite for participation is having comprehensive, high-quality data, which this project aims to acquire.

“In the Caribbean, we have not actually quantified how much carbon is stored in our mangrove soil. The significance of the study is that understanding how much carbon is stored helps in terms of how we can use and monetize this information. This will allow us to investigate initiatives where we can actually receive payments to preserve our mangrove forests in a pristine state, or even rehabilitate degraded ecosystems so that they can continue to store carbon,” stated IMA Director, Dr. Rahanna Juman.

More rigorous data collection qualifies countries for higher pricing tiers – and the data collection processes used by the IMA correspond to the top tier. This research, along with the policy components of the project and information sharing collaborations with other Caribbean territories who engage in carbon trading, is a proactive step contributing towards Trinidad and Tobago’s readiness to participate in carbon markets in the future.

This data will also be used to inform evidence-based conservation policies, contribute to Trinidad and Tobago’s commitments under the Paris Agreement, and will be publicly available for use by academia and companies who want to make mangrove restoration part of their corporate policy.

The Ministry of Planning and Development is totally behind this research which supports Theme V of Trinidad and Tobago’s National Development Strategy, Vision 2030, Placing the Environment at the Centre of our Social and Economic Development, and our national commitment to the Global Sustainable Development Goals, particularly Goal 13, Climate Action.