T&T and UNFPA discuss support for Population and Development Report 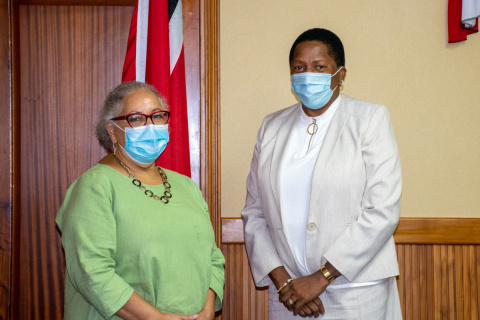 Trinidad and Tobago is well positioned to receive technical support from the United Nations Population Fund (UNFPA) for the completion of this country’s Montevideo Consensus Reporting for 2023. This was revealed during a courtesy visit by the Director and Representative, United Nations Population Fund (UNFPA), Sub-Regional Office for the Caribbean, Ms. Alison Drayton with the Honourable Pennelope Beckles, Minister of Planning and Development. The UNFPA is meeting with key partners and stakeholders in Trinidad and Tobago to discuss areas of support within its new Sub-Regional Programme 2022-2026 and to explore opportunities to further strengthen the existing partnerships.

Citizens of Trinidad and Tobago are set to benefit under the priorities of the Consensus which embrace youth issues, including preventing teenage pregnancy and eliminating unsafe abortion; strengthening social security and social protection for older adults; and incorporates international migration and the protection of migrants’ human rights. Trinidad and Tobago’s indigenous communities are ensured their rights, as the Consensus affirms the UN Declaration on the Rights of Indigenous Peoples (UNDRIP), and calls on countries to guarantee the territorial rights of indigenous peoples. Regarding gender issues, it commits countries to increasing equal participation for women in public decision-making, preventing violence against women and girls, and incorporating domestic and care work into social protection systems.

Ms. Drayton indicated that the UNFPA is desirous of supporting the Ministry of Planning and Development with the Montevideo Consensus Reporting through:

The Montevideo Consensus report is supportive of the goals of the Government’s National Development Strategy (Vision 2030) specifically Theme I: Putting People First: Nurturing Our Greatest Asset”. This is evidenced by the support given to initiatives of the Government of the Republic of Trinidad and Tobago that are geared towards addressing issues of Sexual and Reproductive Health and Gender. Furthermore, these initiatives will contribute to the achievement of the Sustainable Development Goals (SDGs), such as Goal 3: Good Health and Well-Being, Goal 4: Quality Education and Goal 5: Gender Equality, to name a few.

The Ministry of Planning and Development values the close relationship and support provided by the UNFPA in key areas related to the country’s development goals and looks forward to continued collaboration with the United Nations Population Fund (UNFPA), Sub-Regional Office for the Caribbean.