Statistics in Focus: Measuring Poverty in Trinidad and Tobago - A Statistical Approach 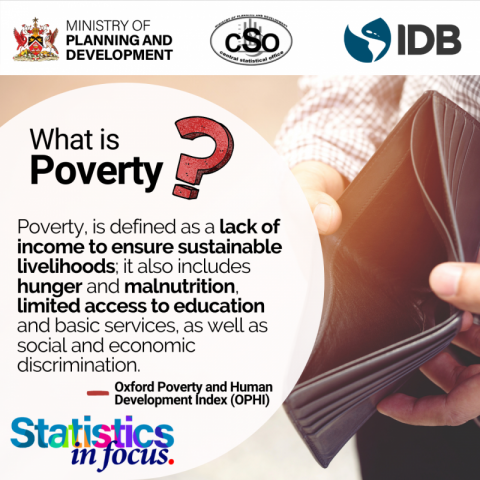 More than 700 million people across the world live in extreme poverty according to a United Nations (UN) report in 2015. The international poverty line is defined as an income of US$1.90 per day, a figure stipulated by the World Bank; incomes below that figure are considered to be extreme poverty. Half of those living in extreme poverty are children followed by women representing a majority in most regions and age groups. Poverty, defined by the Oxford Poverty and Human Development Index (OPHI) as a lack of income to ensure sustainable livelihoods, also includes hunger and malnutrition, limited access to education and basic services, social and economic discrimination.

The UN has positioned ending poverty as the top priority in their 17 Sustainable Development Goals. Target 1A of this goal is to ‘ensure significant mobilization of resources from a variety of sources, including through enhanced development cooperation, in order to provide adequate and predictable means for developing countries, in particular least developed countries, to implement programmes and policies to end poverty in all its dimensions.’ The World Bank’s nowcast -a preliminary estimate- suggests that the COVID-19 pandemic has undone significant strides made within a generation, with an estimated 88 to 115 million more people pushed into extreme poverty in 2020.

To monitor the progress of countries in ending poverty and to determine the effectiveness of poverty reduction policies and programmes, poverty measurement is necessary. Multidimensional poverty measurements create a comprehensive view of the different types and levels of disadvantages faced by the world’s poor. These can include lack of education, poor quality of work, the threat of violence, disempowerment, poor health, inadequate living standards, and environmental susceptibility.

The OPHI has developed a methodology that measures poverty in a range of different countries and varying contexts. Called the Alkire-Foster (AK) method after the OPHI’s Sabina Alkire and James Foster, it is used to monitor and evaluate poverty reduction initiatives, to target poverty reduction services or conditional cash transfers for the deprived, and to develop national, regional or international measures of poverty or wellbeing.  It involves counting the different types of deprivation that individuals experience at the same time, such as a lack of education or employment, or poor health or living standards. Adopted by the United Nations Development Programme in 2010, the AK method was also used to create the Multidimensional Poverty Index (MPI).

The MPI uses microdata from household surveys to classify persons in a given household as poor or non-poor depending on the deprivations that they experience; it is also useful for determining the incidence and intensity of poverty in a given region. That data contributes to the national measure of poverty.

The unequal distribution of wealth in emerging economies tend to be both geographic and demographic in nature.

In Trinidad and Tobago, urban settlements are concentrated in the western half of Trinidad and the south-west of Tobago. Sparsely populated areas include the eastern region and the south-western peninsula of Trinidad as well as the north-east of Tobago. Areas with low population densities generally experience low levels of social and economic development leading to a poorer quality of life. It should be noted that, despite this generalisation, there exist wealthy communities in rural areas as well as poor communities in urban areas.

In 2018, Trinidad and Tobago’s unemployment rate stood at 4.1%; compared to Canada’s 5.5% and Australia’s 5.3%, it was one of the lowest in the world. Labour force participation, however, has been on a decline over the past few years. With two-thirds of the region’s unemployed classified as youth, youth unemployment levels in the Caribbean are among the highest in the world.

According to the United Nations Development Programme (UNDP) Human Development Report, a 2011 study noted that, in Trinidad and Tobago, 9 thousand persons were multidimensionally poor while 51 thousand were vulnerable to multidimensional poverty. However, the CSO’s Household Budgetary Survey and the Survey of Living Conditions shows that over the years, the poverty level has fluctuated with recent studies showing a decrease in poverty and positive indicators for social development.

Although regarded by the United Nations (UN) as a high income developing country the government remains committed to reducing poverty levels by 2% each year. This is integral to the achievement of “Eradicating Poverty” Goal-1 of the Sustainable Development Goals and the national development goals articulated in Vision 2030.