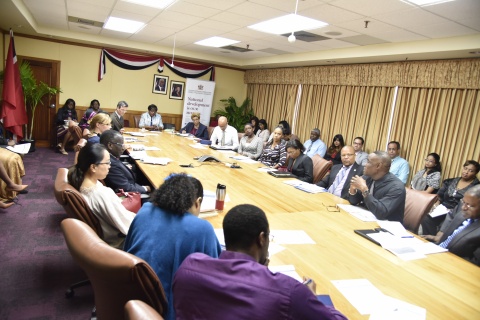 I am extremely pleased to be part of today’s discussions on the Multi-country Sustainable Development Framework Country Implementation Plan for Trinidad and Tobago 2017 – 2021, otherwise known as the MSDF CIP-TT.  As head of the Government’s team charged with the task of deepening our relationship with the United Nations, I must confess to the Government’s sincerest appreciation of the level of cooperation which we have received from this august body, and my own personal gratitude to Mr. Blewitt who, in his own inimitable style, has not only become a critical player in these discussions, but I dare say part of the fabric of Trinidad and Tobago’s thrust to achieve success in its Implementation Plan.

Since the First High-Level Meeting on the CIP-TT in July 2017, Trinidad and Tobago has continued to weather serious economic, fiscal and social challenges, with varying degrees of success. We believe we have achieved, in part, the stabilization of an economy that was in free fall when we assumed office in 2015. The necessary medication of reining in public sector spending and deliberately prioritising critical capital expenditure, whilst not always palatable to the national appetite, has achieved Government’s intention of maintaining fiscal stability over the past year. One casualty of the prescribed medication though, has been some projects within the Public Sector Investment Programme (PSIP) which have had to be dine in carefully planned phases, or rescheduled entirely to future dates when the public purse has been sufficiently strengthened to facilitate their implementation.

It is within this context that the partnership between Government and the United Nations System in Trinidad and Tobago is seen as an important mechanism for enabling continued support to the PSIP, and other important interventions tied to the achievement of the National Development Strategy known as Vision 2030.

It is well known to all gathered here that the PSIP represents a major part of government’s capital expenditure component in the National Budget and is intended to be the instrument through which developmental policies and plans can be turned into tangible outcomes through well-defined programmes and projects. Conceptually, the PSIP comprises investment projects which are both transformational in nature and reflective of the country’s development objectives and priorities as articulated in Vision 2030. It is largely via projects undertaken through the PSIP that more jobs can be created and the wheels of the national economy continue to turn. A more active PSIP implementation plan therefore, which can be facilitated through today’s discussions, is of paramount national importance.

Today’s exercise is closely aligned with the National Development Strategy as it is focuses on Theme Two of Vision 2030: ‘Delivering good governance and service excellence,’ the aim of which is to strengthen our democratic institutions by providing the support for citizens to be participants in the national decision making process.
Ladies and gentlemen, this Government is mindful of the perception that citizens’ only contribution to the democratic process is via the electoral process conducted every five years. The discussions in which we will participate today, are designed to help us create a more responsive and inclusive public policy framework that caters to the needs of all citizens, and deepen that democratic process.  Our participation in today’s exercise is testimony to our belief that good governance and service excellence are not only Government’s responsibility, but also that of our non-governmental organizations, civil society, the private sector and all individuals who hold dear the national interest.
Guided by the United Nations clearly articulated Sustainable Development Goals, Theme Two has been constructed as a means of realising the Goals 10, 11, 16 and 17:  that is, ‘Reducing inequalities’, ‘Building sustainable cities and communities’ ‘Facilitating peace, justice and strong institutions’ and ‘Creating partnerships for the goals’.

Mindful of its role as the chief architects in Government’s PSIP implementation framework, the Ministry of Planning and Development, last year, identified twenty (20) priority projects that were deemed to be transformational according to their impact on achieving the Vision 2030 goals for the medium term 2017-2020. These projects centred on the Government’s agenda of institutional reform and economic transformation, particularly in the areas of public service delivery and diversification.

Some examples of those projects which we believe UN is particularly well placed to provide technical and policy-related support include:

Ladies and gentlemen, what is extremely encouraging for us in Government, is the success of these two projects in which the UN is playing a pivotal role, namely the establishment of the Juvenile Courts and the enhancement of the Single Electronic Window. The success of these two projects translates into significant benefits for the national community and, by extension, the improvement in the quality of life available to all impacted by them.

The nature and results of the UN’s support for the implementation of the PSIP and achievement of the Vision 2030 is the focus of today’s meeting and I look forward to sharing the positive impacts that the UN’s contribution continues to have upon the socio-economic wellbeing of our citizens. Today also provides a forum for the Government Ministries and agencies represented here to indicate to our UN partners those areas where additional support is needed. The Government is very appreciative of this opportunity and I trust that it will be employed to its fullest potential.

At last year’s meeting, I articulated the Ministry of Planning and Development’s plans to restructure its operations in the area of technical cooperation through establishment of the International Development Cooperation Division (IDCD). I am happy to report that establishment of the IDCD is currently a work in progress and our development partners, including the UN, have been apprised of the status of this much needed intervention.

Going forward, I trust that the Government and the Ministry of Planning and Development can continue to call upon the expertise and advice of the UN. I sincerely believe that Mr. Blewitt has continued the long tradition of cooperation between Trinidad and Tobago and the UN, and I harbour no reservation whatsoever in stating that as long as he is here, I know that cooperation will continue to flourish.

Ladies and gentlemen, like you, I look forward to an informative and engaging session on the CIP-TT and its implications for Trinidad and Tobago.  I implore you to take advantage of the opportunity before us today, especially to identify the needs of your Ministries in the context of achieving the national and global goals before us.

I thank you for the courtesy of your attention and pray that God blesses us and our deliberations today.