Remarks by the Hon. Camille Robinson-Regis at the designation of the Scarlet Ibis as an Environmentally Sensitive Species- 26-07-2018 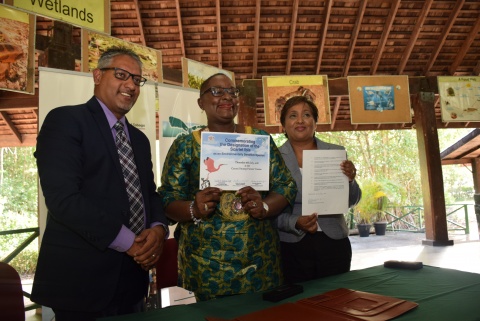 Minister of Planning and Development

Today is indeed a red-letter day for Trinidad and Tobago, as we sign into law the legal notice officially designating the Scarlet Ibis as an Environmentally Sensitive Species. This designation now affords the Scarlet Ibis, declared as one of our national birds since 1962 and which appears on our one dollar bill, the protection under law reserved for other similarly designated species such as the Pawi, the Manatee, the White-tailed Sabrewing Hummingbird, and the Leatherback and Loggerhead turtles, among others. That we have come to the point of today’s historic signing is evidence of this Government’s commitment to ensuring that all aspects of our environment receive the attention and protection they deserve, notwithstanding efforts by others to do otherwise.
I wish to extend sincerest thanks to my Cabinet colleague who, in both his private and public capacities, continues to champion the cause of the environment while recognizing the economic dimension of those who depend on the very environment for their sustenance. I recall with pride, even before he was appointed Minister of Agriculture, his defence of those who engage in wild-life hunting for a living when there was a very capricious decision to ban all hunting. His argument then, as it remains now, is that all attempts must be made to strike a balance between economic growth and development and environmental sustainability. It is for that reason that the Government’s Vision 2030 has as one of its pillars: “Placing the Environment at the Centre of Social and Economic Development”.
We have ratified the Paris Agreement Styrofoam, T&T has been determined – SDGs.
I must place on the public record too my congratulations to the Chairman, Board and Management of the EMA for their unstinting dedication to the task of managing the environment on behalf of the people of Trinidad and Tobago. Slowly but surely the EMA is changing its image from that of “the Noise Police” to that of “stewards of the environment.”
The Scarlet Ibis, like so many of our national symbols, has long been a national bird under siege. Many are the heart-wrenching stories that have played themselves out before the Magistrates’ Courts of Trinidad and Tobago, where persons have been hauled for poaching, killing, selling and trafficking Scarlet Ibises. Ladies and gentlemen, one of the unfortunate lessons I have learned in my many years of Government, is that there are two things for which you cannot legislate – decency and patriotism.
This Caroni Swamp, where we are currently located, is the only known breeding habitat for the Scarlet Ibis and therefore the increasing use of the swamp for recreational activities, uncontrolled eco-friendly activities and even economic pursuits, jeopardise the nesting and breeding grounds so desperately needed for the continued propagation of the species. It is for these reasons, ladies and gentlemen, that as the Minister tasked with the responsibility for the protection of the environment, there was no hesitation on my part for the Ministry of Planning and Development, through the EMA, to take charge and participate fully in this exercise.
This partnership between the EMA and all stakeholders is critical if we are to ensure that there are more events like that which we celebrate today. I am hoping that today’s successful partnership between the EMA, under the Ministry of Planning and Development and the M9inistry of Agriculture, Land and Marine Resources will obliterate what was certainly a dark day in July some six (6) years ago, when bulldozers were used to re-route a river in Grande Riviere and, in the process, succeeded in killing hundreds of endangered turtles and hatchlings on the beach, in an operation overseen by the then EMA Management.
I am told that more than $1 million dollars is generated here annually through eco-friendly tourist tours. Today, therefore, we not only legitimise the protection of one of our star tourist attractions, but in the process, bring a level of protection as well to the Caroni Swamp which is home to the species. The designation which we bring into being today, not only protects the Scarlet Ibis but also contains prohibitions, for example, against the use of larger boat engines which generate too much noise.
There are several next steps upon which the Government has embarked in our quest to improve the quality of our local land and marine environment. You would have heard earlier this week the Minister of Public Utilities, Senator the Honourable Robert Le Hunte articulating Government’s intention to have the long-awaited Beverage Container Bill debated in the Parliament before year’s end. Similarly we are moving to have SWMCOL designated as an Authority and vested with all the powers that come with that designation. We are moving to close the landfills and concurrently ramp up significantly the national recycling efforts. We are also treating with the threats posed by the continued widespread use of Styrofoam products and are far advanced in our discussions with the relevant stakeholders on this matter.
Ladies and gentlemen, the Government of Trinidad and Tobago, your government, is very mindful of its role in the conservation and preservation of the environment. We are equally mindful of our role to grow and diversify the national economy. The two are never mutually exclusive, and there are times when, as in the case of the construction of the Highway to Toco and the establishment of the Sandals Hotel in Tobago, there is need for extensive consultation, extreme care, and a willingness on both sides to enter into these discussions with a greater degree of flexibility.
As Minister of Planning and Development, charged with overseeing these processes, we have the firm belief that Environmental Pride, is National Pride.  I give the national community the assurance that I too see myself as a steward of God’s creation, with a responsibility to manage it wisely and defend it zealously.
I thank you for the courtesy of your attention, and wish everyone God’s richest blessings.