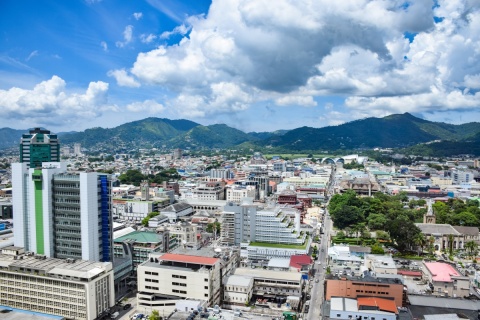 Significant progress has been made by Government in its plans for the revitalisation of the capital city.

This was affirmed by Acting Planning and Development Minister Senator Allyson West, following a meeting of the Ministerial Committee for the Revitalisation of Port of Spain last week.

West is chairing the Committee while Planning and Development Minister Camille Robinson-Regis is on medical leave.

Participating in the second meeting of the Committee hosted by the Ministry of Planning and Development were Minister of Rural Development and Local Government, Kazim Hosein; Minister of Housing and Urban Development, Pennelope Beckles; Minister of Works and Transport, Rohan Sinanan, MP for POS/St Ann’s West Stuart Young; Minister of Tourism Culture and the Arts, Randall Mitchell, and MP for Port of Spain South, Keith Scotland. A team from UDeCOTT was headed by Chairman Noel Garcia.

The formation of this Committee follows the announcement of the Government’s plans for the revitalisation of Port of Spain by Prime Minister Dr Keith Rowley at a Spotlight on Urban Development Forum.

UDeCOTT has proposed a master plan to revitalise the city and promote economic development which includes developing Port of Spain into a smart city and technological hub that is walkable, accessible and safe while building on the inherent culture of Trinidad and Tobago.  UDeCOTT’s plan is also aimed at facilitating residential development and increased commerce in Port of Spain.

Two initial Requests for Proposals (RFPs) have been issued publicly, one for the development of the former Salvatori Building site into a mixed use, smart and sustainable building complex facilitating residential, commercial and cultural spaces.

The second RFP for Piccadilly Street requests design-build proposals for a housing development.

There are no plans to dislocate residents from Port of Spain, but to work with the communities to enhance the economic and cultural values of the nation’s capital city.  The deadlines for both RFPs are in April 2021.

A third RFP is in development for a concept focusing on the revitalisation of the City Gate transportation hub, which will also allow more spaces for entrepreneurial activity. UDeCOTT has issued the RFPs as part of the Prime Minister’s mandate to develop the Revitalisation Project under a public private partnership (PPP) model, which will allow for private investment via foreign and or local investors into most of the proposed projects.

Steps are being undertaken by Powergen to continue the decommissioning process for the former plant on Wrightson Road, which includes a two phased project involving dismantling and removal of existing machinery and decontamination of the site followed by remediation activities to be undertaken this year, all of which must be done before the site can be used for any other plans.

The Port of Spain City Corporation has also undertaken cleaning and beautification of Independence Square, Queen Penny Commissiong Street, Nelson Street and will continue a series of plans that include enhancing city policing and lighting in the city.  The use of solar and renewable energy is of high consideration to the Committee, and the Ministry of Public Utilities is advising on this.

The Ministry of Planning and Development is continuing engagement with the Ministry of Social Development and Family Services with regard to relocation and rehabilitation of the homeless on the city’s streets.  Work is being done to identify various sites for the possibility of constructing a facility that can be used to ensure that the city’s homeless are treated, cared for and given every opportunity to live productive lives off the city’s streets.

The Port of Spain Revitalisation Project is a major programme that falls in line with Trinidad and Tobago’s National Development Strategy: Vision 2030, of which Theme 1 focuses on putting people 1st, nurturing our greatest asset.  This is also reflective of Government’s commitment to the global Sustainable Development Goals (SDGs), especially SDGs 1 and 11, which aim to end poverty in all its forms everywhere and make cities and human settlements inclusive, safe, resilient and sustainable.