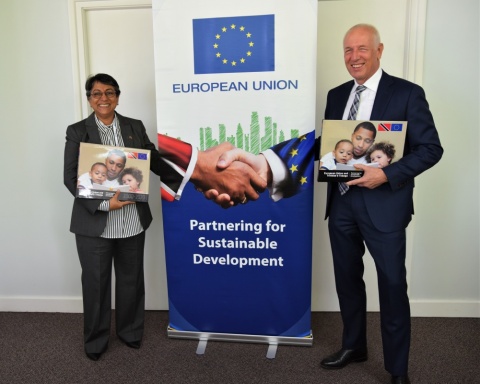 The European Union (EU) and the Government of Trinidad and Tobago are celebrating 44 years of partnership. It has been a productive relationship ever since the EU opened its first mission in this country in 1976. To celebrate this milestone, the EU in collaboration with Ministry of Planning Development, published a commemorative book entitled, “European Union and Trinidad and Tobago: Partnering for Sustainable Development – 2000-2020”.

Ambassador Biesebroek commented: “Much of the publicity surrounding EU development cooperation tends to revolve around the amount of the funding support. What we wanted to highlight, however, was the impact of this assistance over the years and to put a human face to our joint efforts, because ultimately, the goal of these programmes is sustainable human development.”

Permanent Secretary of the Ministry of Planning and Development, and National Authorizing Officer, Ms. Joanne Deoraj, thanked the EU for the positive collaboration for over four decades in so many diverse sectors of Trinidad and Tobago’s economy. She noted that the support has had lasting impact on people and institutions and looked forward to continued partnership with the EU.

In addition, allocations were provided for Human Rights initiatives in the sum of EUR .92 million, Civil Society Organization (CSO) Support in the sum of .7 million, as well as for the Accompanying Measures for Sugar Protocol (AMSP) Countries in the sum of EUR 75 million. T&T has also benefitted from other EU grants, which fall under regional programmes. During the period 2000 to 2020, allocations totaling EUR 552.5 million were provided to support regional integration and cooperative efforts among CARIFORM member countries.

Follow the EU and the Ministry of Planning and Development via our websites, Facebook, LinkedIn, Twitter and Instagram pages to win a copy of this elegant commemorative publication. Stay tuned to answer trivia questions, as we test your knowledge on the EU-TT’s 44 years of partnership. You can also view the publication at https://eeas.europa.eu/delegations/trinidad-and-tobago/79030/newly-published-eu-and-trinidad-and-tobago-partnering-sustainable-development_en