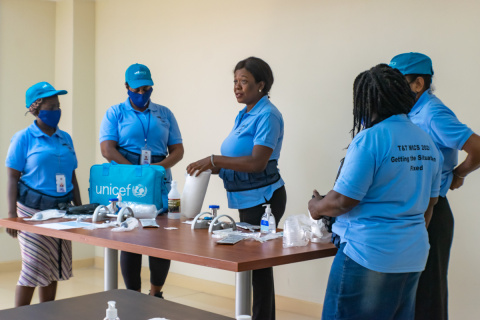 Photo: CSO Staff demonstrating use of testing equipment to be used by MICS field survey staff in 2022.

The CSO aimed to administer the 2022 Trinidad and Tobago MICS to a representative sample of approximately 9 000 households, and reached 8 962, a household response rate of 91.8%, using Computer-Assisted Personal Interviewing technology for the real-time collection of data. Fieldwork lasted for approximately four and a half months from the date of commencement across Trinidad and Tobago.  The CSO extends congratulations to citizens and residents of Trinidad and Tobago, and thanks all who contributed to the success of the survey, while encouraging the continuous support of the CSO’s surveys.

The responses are now being analysed and a report is estimated to be ready for public release in six months.

Planning and Development Minister Pennelope Beckles also extends congratulations to citizens for supporting the work of the CSO in this regard, ensuring the high response rate.  Minister Beckles thanks the Management and Staff of the CSO, stating that the Statistical Office has continued its focus on professionalism and generation of high quality statistics, while working to transform Trinidad and Tobago’s National Statistical System.  The Minister acknowledges the support of UNICEF for this project, emphasising the importance of this partnership in achieving the Sustainable Development Goals and all the goals of Trinidad and Tobago’s National Development Strategy, Vision 2030, through the provision of evidence based data.

Minister Beckles reminds citizens that the data the CSO has available is based on what is made available to the CSO through national participation in such surveys and providing required information to the CSO and other institutions which comprise the national statistical system.

The MICS is a household survey implemented by many countries under a programme developed by the United Nations Children’s Fund (UNICEF) to provide internationally comparable, statistically rigorous data on the situation of women and children. This CSO implemented survey comprises some of the most comprehensive data on the status of women and children in Trinidad and Tobago. The last such surveys were conducted in 2000, 2006 and most recently 2011.

A pilot of the survey was conducted in various parts of Trinidad in November 2022, which allowed field staff to get comfortable with every element of survey work, map reading and location, interviewing and sending completed data to supervisors in preparation for the actual fieldwork related to the MICS. Approximately 35 interviewers, 10 supervisors, 10 water quality testing officers and 6 observers comprised the team administering the survey.

Some of the types of data collected from previous surveys included: Use of improved drinking water sources, Birth Registration and Attendance to early childhood education, among others.

The recently completed MICS revealed an overall Household response rate of 91.8%.  Please see the table below for the response rate in other areas.

Although the objectives of this survey were varied, one key goal of the MICS is the collection of disaggregated data for the identification of inequities and disparities to allow for evidence based policy-making aimed at social inclusion of the most vulnerable in our society. This data will help to monitor Trinidad and Tobago’s progress in achieving the global Sustainable Development Goals (SDGs), through the National Development Strategy, Vision 2030.

Members of the public are reminded that all information collected during these exercises followed strict confidentiality protocols and will not be shared outside of the exercise.

The CSO is grateful for the cooperation of households throughout the survey process and encourages all citizens to continue to participate in future exercises and surveys to be conducted, one of which will be a year-long Household Budget Survey/Survey of Living Conditions (HBS/SLC), starting in January 2023 and ending in January 2024.  The Household Budget Survey will provide detailed data on household income and expenditure not available from any other source, while the Survey of Living Conditions assesses social data on areas such as poverty, health, education and other indicators.  The CSO is also making preparations for Trinidad and Tobago’s upcoming Population and Housing Census.