Coral bleaching and Tobago: the Past, Present and Future 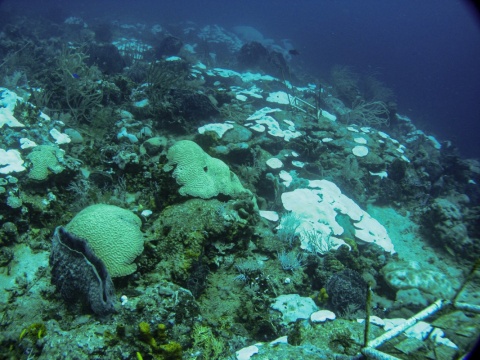 The coral reefs of Tobago are an unsung treasure. While most Trinbagonian’s have never seen these reefs, most of the seafood, the beaches we lime on and sources of income (especially in Tobago) are dependent on our coral reefs. How can coral reefs perform such important functions? Well, let us start at the basics.

Corals are marine animals closely related to the jellyfish, but instead of being a transparent and living in the water column, corals settle, grow and live in one location for their entire lives. They have a special relationship with microalgae, called zooxanthellae that find safe haven in the coral tissues. In return, the zooxanthellae provides the coral with food from the sun giving them enough energy to build a calcium carbonate skeleton. The microalgae also give corals their bright colours. A collection corals growing in an area, mostly in clear, shallow tropical waters, builds a reef from their skeletons that other marine animals and plants can use as their home. Large reef structures built by corals over thousands of years can be seen from space – even the reefs that surround Tobago. Coral reefs provide homes to 25 % of all marine life, yet, they cover less than one percent of the ocean bottom.

Unfortunately, coral reefs are out of sight out of mind and we do not see how we may harm them through our activities. Therefore, it is the responsibility of organisations, such as the Institute of Marine Affairs (IMA), to monitor and research these marine ecosystems around Trinidad and Tobago, and communicate the importance of their health and function. In the era of a rapidly changing climate, tackling this global problem can be especially challenging. We must all work together to curb the threats to one of our most important marine resources, specifically the existing problem of coral bleaching events because of global warming. Coral bleaching events are underwater disasters where the water temperatures get too warm for corals to function properly resulting in widespread coral bleaching and die off. The bleaching effect comes from the break down in the relationship between the coral and its microalgae resulting in the expulsion of the algae from the coral tissues and leading to the corals turning white. Without its major source of food, the corals will starve and eventually die.

Over the last twenty years, Tobago’s reefs have experienced two major coral bleaching events aligned with a regional and global coral bleaching event in 2005 and 2010 respectively. Both of these events resulted in the widespread bleaching and coral death around Tobago.  During the bleaching event in 2010, many reefs in Tobago suffered extensive loss of hard coral cover. In some areas this loss was as much as 50 % and reefs have seen little recovery in terms of hard coral cover since this time. Instead, hard coral cover has remained relatively stable at the monitored reefs in the past 8 years and the average coral cover around Tobago has remained around 18%.   This is a concern because without the growth of new corals, there may be a corresponding loss in resident fish communities and other marine organisms; this will, in turn, affect our livelihoods. It is predicted that as our oceans continue to warm, bleaching events will become more frequent (potentially every summer) and severe.

In August, the National Oceanic and Atmospheric Administration (NOAA) produced their annual global coral bleaching outlook. It was predicted that parts of Trinidad and Tobago might have prolonged exposure to above normal sea surface temperatures that may result in widespread bleaching. Persons working in or on the water in Tobago noticed this as there were reports of surface waters around Tobago feeling like a warm bath, while, below the thermocline at depths greater than 3 metres, the water was much cooler. As most of our existing coral reefs sit in 10 metres of water, this is good news. However, there are locations where coral communities sit in shallow waters – most notable is our only marine protected area – Buccoo Reef and Bon Accord Lagoon Area – and is likely to be exposed to the warm surface water. Buccoo Reef already exist in compromised marine environmental conditions exposed to sedimentation, pollution run off from the land and physical damage. Consequently, the added thermal stress on top of the existing problems may prevent the reef from recovering from coral bleaching.

While the IMA has only received reports of minor bleaching on other shallow reefs located in the south side of the island (Flying Reef), other parts of the Caribbean, such as Cuba, Curacao and Belize, have also experienced more severe bleaching on their reefs. Fortunately, the latest projection by NOAA shows that our surrounding oceans may be cooling finally. The IMA is still asking people working in Tobago to report any sightings of coral bleaching.

Globally, coral reefs are already not doing well. With a global average sea-surface-temperature rise of less than one degree over the last century (< 0.86 C), reefs around the world – even the most remote and pristine places – have suffered massive bleaching and mortality during the summer months. The Caribbean has lost 50 % of its coral reefs in the last 50 years because of coral bleaching and local reef disturbances. If we continue on this trajectory without effective local and regional action there may be no viable Caribbean reefs left in the next fifty years. While, we may escape without major damage this year (finger crossed!), we still have to contend with a future of even warmer seas.

Climate change requires global action to curb carbon emissions, but we also need boots on the ground to ensure that our reefs have the best chance of survival.  If climate change were akin to a virus, we would place our coral reefs in intensive care and create an environment that is conducive to recovery from and building resilience to coral bleaching and climate change. To do this, we need to curb the two other major threats to our coral reefs, which are (nutrient and chemical) pollution from the land and unregulated fishing. The former encourages the bloom of fleshy macroalgae on reefs that smother corals and prevent growth, as well as encourages coral diseases. The latter is the unsustainable removal of fish needed to control the growth of the macroalgae, especially in an event of a bloom.

Controlling these two threats will be the first steps to improving the health of our coral reefs and giving them a better chance in the future. As an individual, small mindful actions do work as they add up to make a big difference. Avoid fishing of important reef fish, such as parrotfish and other grazers, talk to your fisherman about seeking alternatives. Avoid land clearing during the rainy season and in the bay areas near reefs, dispose of chemicals and oils from your cars and boats properly and avoid throwing into the bays. Most importantly explore the reefs to see for yourself how they are doing and if you are afraid of getting wet, connect with us at the IMA.