Cooling off on ACs 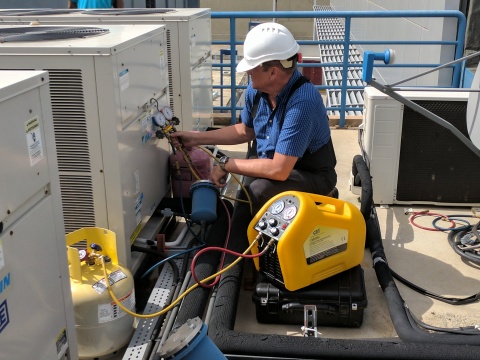 AIR conditioning and refrigeration is not just about cooling your home and office and allowing you to have cold drinks.

The industry overlaps with many other sectors including tourism; the storage and transport of fish, meats, fruit and vegetables; the industrial sector; the medical sector with respect to operating theatres, the storing of vaccines, and even the morgue.

“When you think about it, AC and refrigeration is way more than just sitting in a cool room. It underpins a lot of the sectors that drive our economy or at least allow it to be stable,” said Dr Marissa Gowrie, Deputy Environmental Manager and National Ozone Officer in the Environmental Policy and Planning Division of the Ministry of Planning and Development.

Gowrie told Newsday that in August 1989, Trinidad and Tobago signed on to the Montreal Protocol which addressed the depletion of the Ozone Layer and set obligations for countries under the Protocol.

She explained the ozone layer was basically a UV filter, and that unfiltered UV rays could cause illnesses such as skin cancer, cataracts, and weakened immune systems. The hole in the Ozone Layer is a result of gases released into the atmosphere, including refrigerants such as Chlorofluorocarbons (CFCs) and Hydrochlorofluorocarbons (HCFCs); the fumigant Methyl bromide; Halon, a fire suppressant; and more.

“The countries came together in the 1980s and agreed to phase out these ozone depleting gases but the gases affect the ozone differently.

The Montreal Protocol addressed the worst ones first. However, in doing so, there was a time lag so all the others started to be used in so much quantity that their effect was just as bad. So the Montreal Protocol brought up the phaseout date for some of these gases.” Therefore, the National Ozone Unit has helped develop support systems and framework to assist TT in meeting the obligations of the Montreal Protocol, as well as safeguarding the country.

She noted that in 2007 the use of CFCs were phased out, the process of phasing out HCFCs began in 2013, and in 2015, TT banned the import of all assembled air condition (AC) and refrigeration units that use HCFCs.

Also, in collaboration with the TT Bureau of Standards, the Ozone Unit developed labelling standards for refrigerants coming into the country ; a license is now necessary to import all refrigerants; national guidelines for AC and refrigeration practices was developed; and the Unit was also in the final stages of developing an equipment labelling standard.

PROFESSIONAL CERTIFICATION One of the more recent steps was the Professional Certification for the Refrigeration and Air Conditioning Industry which was launched on April 12 this year at the Hilton Trinidad.

Gowrie said the Air-conditioning and Refrigeration Industry Association (ARIA) noticed a lack of professionalism and accountability in the industry.

The organisation felt it critical to address these issues given the various sectors it services and so approached the Ministry.

“For many years ARIA has been voicing that they were seeing a lot of practices they would not endorse. Because of the very rapid changes in technology and refrigerants, a technician needs to be kept abreast, must keep themselves current, and, let’s face it, as a consumer you assume the technician would give you the best technical advice because you don’t know better.”