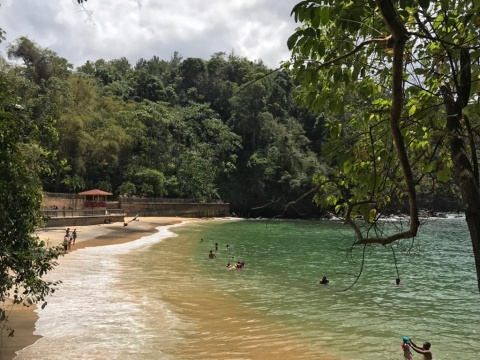 …reinforcing Government’s call in limiting gatherings due to Covid 19

On the heels of the Prime Minister’s call yesterday to limit gatherings to ten people or fewer, the Chaguaramas Development Authority (CDA) has taken immediate steps in closing off access to the Peninsula’s major beaches at Macqueripe, Williams Bay and Chagville. This has become necessary as it was reported that despite the call of the Prime Minister, the Macqueripe Beach remain crowded.

Cabinet yesterday agreed that gatherings should be ten people or fewer, a reduction from 25 initially, in a bid to stop the spread of the Covid-19 virus.

In strengthening the Prime Minister’s appeal yesterday, the CDA took immediate steps in closing off the Macqueripe, Williams Bay and Chagville beaches, three popular recreational sites which attract many beach goers on a weekly basis.

The Authority has further reinforced Government’s call with collaboration among the CDA Police, the Carenage Police and the Trinidad and Tobago Defence Force in ensuring continuous patrols within the Chaguaramas Peninsula.

The CDA continues to exercise its civic responsibility by also ensuring that all bars, restaurants and other similar tenants within the Peninsula accede to this call.

The CDA has been at the vanguard from the onset in protecting the population from the spread of the deadly Covid 19 virus, having already suspended tours and all organized activities on its recreational parks and open spaces until further notice.