1st IMA State of the Environment Report approved by Cabinet 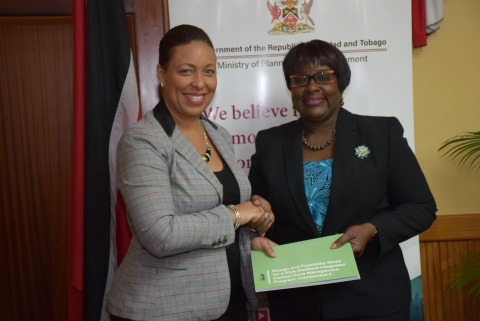 Minister of Planning and Development the Honourable Camille Robinson-Regis announces the Cabinet’s approval of the 1st State of the Marine Environment (SOME) Report (2016) produced by the Institute of Marine Affairs (IMA), which is part of her Ministry’s mandate. The SOME Report provides a scientifically-based assessment of the condition of Trinidad and Tobago’s coastal and marine ecosystems, habitats and species all of which are vital for our development and sustainability. The 2016 Report also details the status of these resources and how they have been affected by the range of natural and human pressures such as land pollution and climate change.

Some of the visible impacts identified include the degradation of coastal and marine ecosystems such as coral reefs, mangroves swamps, seagrass beds and beaches mainly from pollution. These negative impacts have made such ecosystems more vulnerable to the impacts of climate change and other emerging threats such as invasive alien species like lionfish and Sargassum blooms. Safeguarding Trinidad and Tobago’s fisheries resources as a key source of livelihood and nutrition for many marginalized groups and communities in the country is a key area emphasized in the study.

An Action Plan for the implementation of the Policy Framework to mitigate the negative impacts on the coastal and marine environment of Trinidad and Tobago for the period 2017 to 2020 has also been developed addressing 5 integrated thematic areas namely;
• Coastal development,
• The conservation and restoration of coastal ecosystems and resources,
• Sustaining coastal livlihoods,
• Vulnerability to climate change, and
• Pollution.
The report will be launched to the public in April 2017. Given the current state of the marine and coastal environment the Report makes an urgent call for action by the various public and private stakeholders to arrest the impacts and conserve the coastal and marine ecosystems.

Such a study is important for us as an island based economy and as the report indicates the most likely sectors/areas to be heavily impacted by future climate change include agriculture through soil aridity; human health will be impacted through the spread of water borne diseases; human settlements through increased flooding and the loss of natural coastal defenses. The Study also proposes some solutions focusing on the following communities; Manzannila, Guayaguayare, San Soucis, Otaheite and Speyside in Tobago. The overall objective of this Study is for the IDB to provide the Government of the Republic of Trinidad and Tobago with an economically and technically justifiable coastal management related programme.