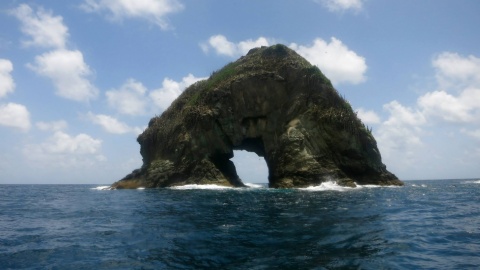 The Honourable Camille Robinson-Regis, Minister of Planning and Development and the Honourable Ancil Dennis Chief Secretary of the Tobago House of Assembly (THA), jointly announce North East Tobago's international achievement of officially being designated a much sought after UNESCO Man and the Biosphere (MAB) Reserve. This designation and associated activities directly contribute to achieving Trinidad and Tobago's commitment to the global Sustainable Development Goals (SDGs 14 and 15).

The MAB Secretariat, based at UNESCO's Division of Ecological and Earth Sciences, at the UNESCO headquarters in Paris officially communicated their decision on Wednesday 28 October 2020. This means that Tobago is now home to the largest Man and Biosphere Reserve in the English-speaking Small Caribbean Island States, the only one larger is located in Guadeloupe, which is a French territory.

Tobago's North-East Tobago Man and the Biosphere Reserve covers over 835 km² and encompasses three protected areas, Tobago Main Ridge, which is the oldest protected tropical forest reserve in the world; the proposed North East Marine Protected Area; as well as 15 communities with rich historical and cultural heritage in north-east Tobago which are home to approximately 10,000 residents. This award was also made possible with the tremendous support of the Environmental Research Institute Charlotteville (ERIC), Tobago and the environmental civil society groups in North East Tobago.

The THA, with support from the Planning Ministry, developed their proposal in approximately two years for submission to the MAB Programme, which is intergovernmental in nature and aims to establish a scientific basis for enhancing the relationship between people and their environments while combining the sciences to improve human livelihoods and safeguard natural and managed ecosystems.

Minister Robinson-Regis extends heart felt congratulations to Trinidad and Tobago, especially the people of Tobago and the leadership of the THA and Civil Society Organisations such as ERIC in making this important designation happen. The Minister also states that this is in keeping with Government's placement of the environment at the centre of social and economic development according to T&T's National Development Strategy, Vision 2030. According to Minister Robinson-Regis, "We are continuing to punch above our weight in the global arena. We are blessed with some of the richest historical, cultural and natural heritage in the world, and our pride and sensibility in protecting our gifts will continue to be rewarded." The Minister also adds that protecting our biodiversity resources also increases our foreign exchange earning potential, because the 5th National Report of Trinidad and Tobago to the Convention on Biological Diversity (CBD) in 2017 revealed that T&T's resources are valued in the region of US $100 million per year in terms of soil protection, water purification services as well as recreation and tourism-based activities.

Councillor Kwesi Des Vignes, the THA Secretary for Infrastructure, Quarries and the Environment also emphasised, "This is yet another milestone for Tobago and the nation on a whole. Trinidad and Tobago is a small nation with a fierce spirit. North east Tobago has always been the pearl of our paradise so it is no surprise that the area is worthy enough to attract the attention of the world." Secretary Des Vignes went on to say that this award presents immense opportunities for business, culture and the arts and education, "But more importantly, it will allow us to benefit from approaches that can better conserve and sustain the environment and experiences we gain from interacting with it."

The THA believes that the timing of the award is a strategic one for Trinidad and Tobago. Due to the challenges in the wake of the COVID-19 pandemic, Secretary Des Vignes and the THA believe that the MAB designation has placed Trinidad and Tobago in an advantageous position as it relates to branding as a premier eco-tourism destination, while attracting financial and technical support from the international community.

Benefits to Trinidad and Tobago of the UNESCO Man and Biosphere Award: